This species belongs to the nightshade family represented in Europe by a few species (Solanaceae). It comes from Central and South America. In Europe, it was cultivated as an ornamental plant until the end of the last century, and only recently has its fruit been eaten.

In field cultivation, the tomato requires abundant fertilization with compost, also top dressing. Due to the tomato's high susceptibility to diseases and often too low temperature for it in Central Europe, it cannot be grown on large areas. In order to obtain a satisfactory yield, it is also necessary to rotate. In field cultivation, such yields can be expected only in dry and warm summers. In the garden, tomatoes are best grown in foil tunnels or against a wall facing south. Good to remember, that the tomato likes "wet legs" and "dry head", therefore, when watering plants, do not wet the leaves and stem.

Mulching the soil is very beneficial. In field cultivation, tomatoes are planted in a row in a north-south direction. They grow well in raised beds or covered with showers. Plants are planted spaced apart 50 x 60 cm, and in double rows in spacing 50 x 70 cm. More dense planting reduces air movement around the plants, which favors more frequent occurrence of fungal diseases. The prerequisite for good plant development is a strong and healthy seedling. The seeds are sown in March in boxes placed on the window or in the greenhouse. If the seedling is too large, it can be planted obliquely instead of vertically, after removing the lower leaves. Seedlings are planted into the ground 15. May. The attachment of the shoots to the stake and the removal of side shoots have a great influence on the growth and abundant fruiting of tomatoes.. Only one strong main shoot is left. 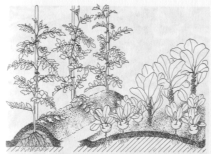 Tomatoes and cruciferous vegetables require very fertile soil, so it is worth planting them on wales or mounds.

All inflorescences can be removed from mid-August, for the set fruit will no longer ripen. Only the end of the main shoot is not shortened. The last tomatoes are harvested just before frost. If they are green, they can be placed on the window or in the inspection, to mature. Growing tomatoes under glass is discussed further. Tomatoes, especially new varieties, they are very sensitive to atmospheric influences, including weather changes, therefore they are best done under cover. Strong planting is a prerequisite for good plant growth, hardened seedlings. The use of various preparations is conducive to better growth, like Algifert, Polymaris, SPS i Oscorna root strengthening. The most dangerous disease of tomato is potato blight (Phytophthora infesians), which attacks plants particularly strongly in cool and humid years. The symptoms of this disease are brown spots on the fruit. By mulching the soil, use of Bio-S, Oscorna-Pilzvorbeuge and water glass can reduce its occurrence.