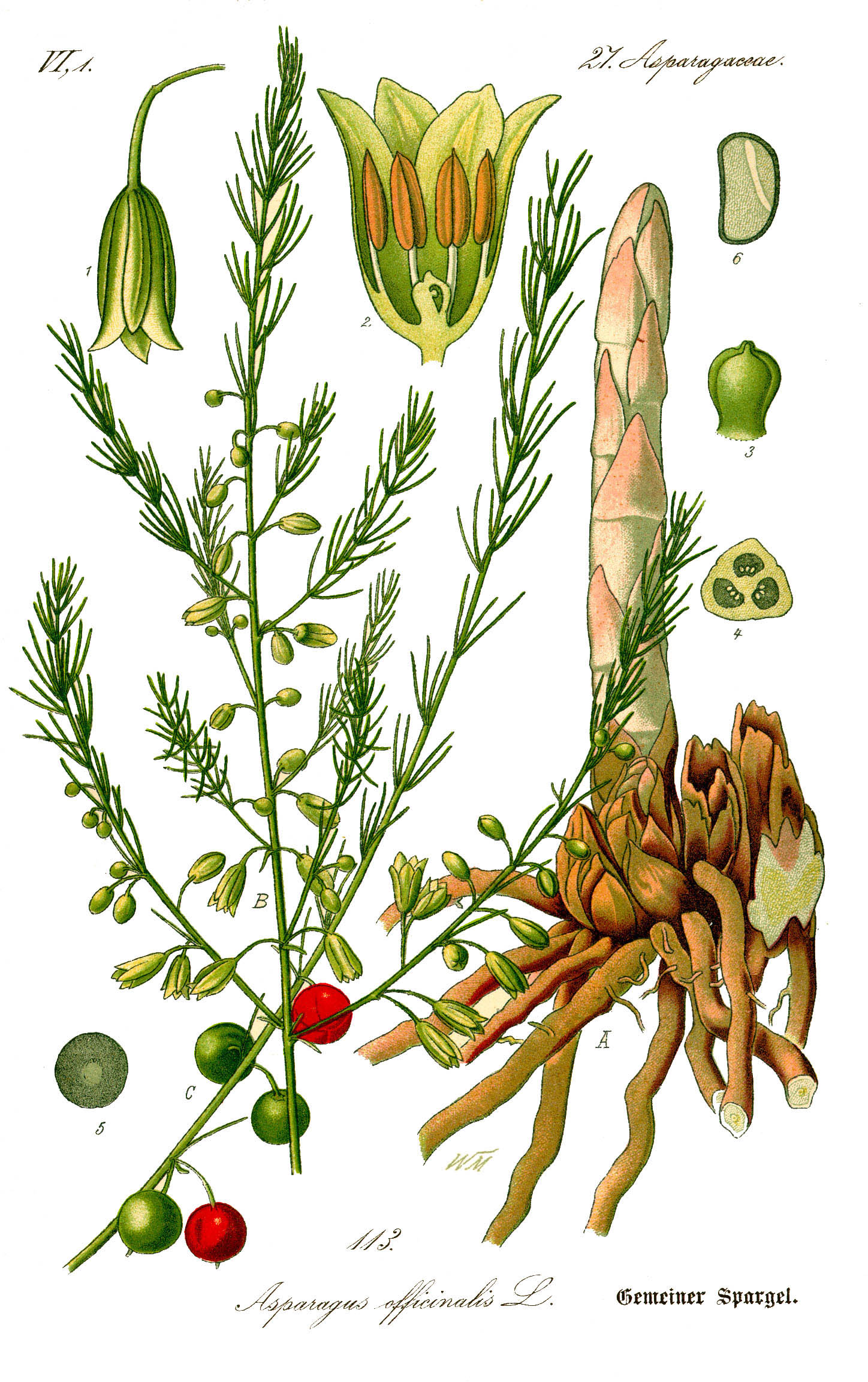 Despite its low nutritional value, asparagus is a valued vegetable, cultivated almost all over Central Europe. Belongs, just like the onion, leek or chives, to the lily family, however, it is very different in structure from bulbous plants. It grows wild on the banks of rivers, in meadows and on sandy sea shores.
Asparagus was known and valued already in ancient Rome, and the current cultivation methods were used as early as the 15th century. The best soil for growing asparagus is humus soil, sandy loam, with an organic substance content of 2.5-3.0%. You can prepare an asparagus bed in the small garden, provided, that we have the right soil. It is worth growing root crops or legumes in the asparagus bed. Deep loosening of the soil is also recommended. 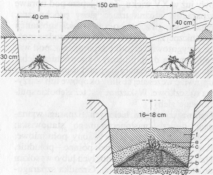 Growing bleached asparagus. Asparagus requires a well-sunny position; the southern slopes are particularly favorable. Rows should be in a north-south direction. Wet soils or soils with high groundwater levels should be avoided. The asparagus patch should be approx 1,5 m wide. If more rows are assumed, the distance between them should be 1,5 m; the length of the bed can be any length. A wide groove is dug in the center of the bed 40 cm and depth 30 cm. The selected soil is deposited on the edges of the flower bed. The soil in the groove is then loosened and mixed with composted cattle manure. In April, co asparagus is planted in the center of the groove 40 cm.

Annuals are best planted, which have 5-6 buds and at least 10 strong roots. You can also plant biennials. Producing seedlings on your own requires a lot of experience, therefore it is better to buy ready-made, well-grown seedling. Varieties of 'Mary Washington' are recommended in Poland, ‘Schwetzingen championship’, ‘Limbras’.

In the prepared groove, co 40 cm, mounds 8-10 cm high are piled from the compost soil. The roots of the planted plant are evenly distributed on each of them, then covers them lightly with earth. Need caution, so that the roots do not dry out. The groove is then filled with a 3-4 cm layer of compost soil and soil previously removed from the groove.. The top bud of asparagus should be approx 18 cm below the surface of the bed. The entire surface is sprayed with a cowberry preparation, and plants appearing at the end of May - with silica preparation. The groove is left not completely filled with earth until the end of the year. Growing weeds should be systematically removed. The edges of the groove can be planted with lettuce or cruciferous plants. Before winter, the trench is filled with compost soil, and in the spring, he sprinkles it with silica. Dwarf beans can be grown in the free lanes between the rows of asparagus, cucumbers, beetroot or celery. The above-ground part of the asparagus is sprayed with a silica preparation in summer and autumn. The soil is re-fertilized the following winter, and in early spring, a cow's preparation is applied. Late March or early April, even before plant growth begins, above the rows of asparagus, earth mounds of high ground are piled up 35 cm and width 50 cm. Then level them and lightly tamp their surface with a board or a shovel. The required soil is selected from the edge of the flower bed, and even from the path.

After three years of cultivation, the first asparagus can be harvested. The harvest begins in April, and end at the end of June. Tabs 17-20 cm long are cut with a special knife after carefully shoveling away the soil. The holes created after cutting the asparagus should be filled with soil and the surface of the shaft should be compacted. In warm weather, the rows are checked several times a day and the tabs are cut out as they grow out, when it is cold - only once. Be careful when cutting the tabs, so as not to damage the root stump. To prevent the occurrence of pests, all the tabs should be cut out, even the thinnest. After the harvest is finished, the paths are loosened, and levels the shafts. In early July, the green parts of the plant should be sprayed with a silica preparation. The aboveground part is cut down in the fall, just below the ground, when the shoots begin to turn yellow. The soil surface is thoroughly covered with compost soil. This is what is done every year. Asparagus can be grown in one place through 15 years, and under favorable conditions even by 18 years. In recent years, the perches have not grown as evenly as they were at the beginning, and the yields lower; mainly green asparagus is harvested. The yield of asparagus varies greatly, they mainly depend on the weather in the spring season. After the asparagus perch has been removed, it should not be placed in the same place for many years.
If you follow the rules of biodynamic cultivation and fertilize properly, asparagus is rarely attacked by diseases and pests.

Growing green asparagus. They are grown more and more because of their high vitamin content, especially A and C.. Growing them is similar to that described above, but a bit easier. The grooves are shallower (15 cm), the distance between the rows is also shorter (1,2 m). There are also no embankments, because the emerging shoots should turn green under the influence of light along their entire length. The green tabs are cut just above the surface, when they are 15-25 cm long, and removes the lignified part. The harvest also ends at the end of June. Green asparagus is slightly crisper in taste, which may not suit everyone, but they add variety to our kitchen.

Mushroom diseases. The most dangerous disease of asparagus is asparagus rust (Puccinia asparagus), which has been infecting green parts of plants since July. Infested, Yellowed shoots should be cut in the fall just below the soil surface and it is best to burn them immediately. Rhizoctonia crocorum is also dangerous, which attacks the roots of asparagus - they are then covered with red-purple mycelium. In warm and humid years, and when the plant spacing is too small, gray mold can cause great damage (Botrytis cinerea). The root disease caused by Zopfia rhizophila is also dangerous. Following the rules of rational fertilization and the use of liquid manure and horsetail infusion inhibits the development of fungal diseases.

Pests. Asparagus rasp can cause great damage to cultivation (Platyparaea poeciloptera). Fortunately, only one generation develops, which appears in the period of growth of young shoots. Therefore, shoots must not be allowed to develop above the soil surface. Young plantations in the second year after planting are most vulnerable. In April, the female of this fly lays eggs at the ends of the shoots, and the hatching larvae eat into the rush to the root. Infected shoots can be recognized by the characteristic curl in the so-called. crosier; they must be cut down immediately and burned. Two more pests can occur on asparagus: asparagus violin and twelve-point violin. The first one attacks young plants, and the other is the fruit of asparagus. They can be fought against Pyrethrum.