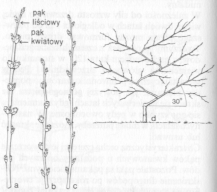 This thermophilic plant can grow in suitable temperate climates, warm soils. Shoots finish growth early, thanks to which even half-stem trees are resistant to low temperatures. To better meet the heat demand, you can lead dwarf trees with a trunk up to 60 cm or form a line next to the wall facing south or south-east. One tree requires 8-10 m2 of surface area. Peaches need to be cut every year. Otherwise, starting from the lower parts of the crown, the branches strip themselves quickly. Trees that are not cut are more easily affected by serious disease, called bacterial cancer, and various fungal diseases, and also attacked by aphids. Bacterial cancer is known, among others. after rubber leaks. Peaches form three types of shoots:

1 - strong fruiting shoots with triple buds: two flower, and in the middle a leafy one;

2 - fruiting short and thin shoots, but with leaf buds at the top;

3 - strong and thick shoots with only leaf buds.

Pruning an annual tree (after planting) it consists in removing all side shoots to a height of approx 60 cm above the soil surface. The left three or four strong side shoots are shortened over the third, and over the fifth eye as far as possible. The guide is shortened by approx 20 cm above the uppermost side shoot. After such pruning, by the fall, many strong shoots will grow to form the future crown of the tree.

The formation of a young crown takes several years and, due to the strong growth of the tree, it begins in August in the first year after planting. On three or four skeletal branches growing vertically upwards, it shortens smoothly, on the so-called. wedding ring. If there are too many shoots growing vertically, the weakest are removed, to facilitate the access of light to the inside of the crown. The greatest attention should be paid to good lighting of the fruiting shoots. Starting from the second year, if the trees are growing too fast, vertically growing branches above the side shoot can be shortened, because at an angle of 30 ° in the lower parts of the crown, the branches are stripped. Then, in March or April, the branches are cut in half. After about five years, a favorable tree height is achieved (3 m).

After setting the fruit and reaching the size of a pea, a summer cut is made. On fruiting shoots, this year's increments over young seedlings at the height of the second-third leaf are shortened. The leaves left behind nourish the growing fruit. In case of excess fruit, it is better to thin them by hand, so that the rest of them reach the appropriate size and color. For old trees, rejuvenating pruning is essential. Trees that are too tall and a crown that is too dense can be lowered by strongly shortening thick branches. After such treatment, it will knock out many one-year shoots, from which you can build a young crown.