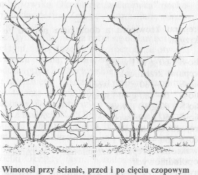 The method of pruning in the second year after planting depends on the length and thickness of the one-year shoot. Such momentum may have from 30 do 200 cm in length. Rush of length 200 cm proves, that a healthy and strong seedling had been planted and that the care and fertilization of the plants were appropriate. The very weak growth is evidence of this, that when planting and caring for the first year, mistakes were made. In this case, contact a specialist for information. However, if the reason for the poor growth cannot be identified, better to plant new seedlings. 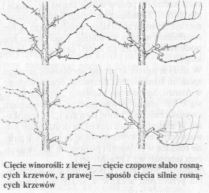 Regardless of the method of cutting and leading the bush, the one-year shoot must be significantly shortened, which favors the development of a strong and straight trunk. The seedling is shortened just after planting over the third eyelet. If shoots grow from these eyes in the first year, it is the strongest of them that is tied vertically, when it reaches a length of 10-20 cm, and the rest are removed. The young shoot is attached to the support at intervals of every 25 cm. In the early spring of the following year, this rush is shortened over 6. eyelet, about 30 cm from the soil surface, leaving a spigot above the eyelet, approx 2 cm. To avoid the "crying" of the shortened shoot, this treatment must be performed in frost-free weather. Leaving a 2-centimeter plug protects the core of the young shoot from drying out. After each winter cutting of bushes, a summer cut is necessary, also shrubs planted in the spring. Then begins the formation of a vertical cord by the so-called. tenon cut, which is especially recommended for low growing varieties. On young shoots growing from the lower eyes, it develops from 1 do 3 inflorescences. The following year, the first five side shoots are shortened to two eyes, and the sixth for six stitches. This is what is done every year, until the bush reaches the desired height.

Summer pruning involves pinching out the fruiting shoots above the sixth leaf of the uppermost inflorescence, when the berries reach diameter 2 mm. Stepchildren growing out of the leaf axils (young shoots) pinches over the first leaf. A new momentum grows out of this part, which also has a very short cut, which will guarantee better insolation of the grapes. The main shoot, on the other hand, becomes shorter than the twelfth one, and the stepchildren growing out of it above the first leaf. To be on the guide (main shoot) there was always plenty of side shoots, this shoot should be shortened over the sixth eyelet in early spring.

Strong-growing varieties require a different pruning, the so-called. long cut. Bushes in a lane form quickly occupy a larger area of ​​the wall. With this method of cutting, the higher meshes knock from 3 do 5 inflorescences. Bushes in the form of a lane with a long cut also require a guide, from which strong side shoots grow. Before the first floor is formed, the first clusters sprout on the main shoot. The principle of a long cut is as follows: in early spring, the side shoots are shortened to two eyes (plug). Two shoots emerge from these meshes. The lower one is shortened again to two stitches, and the upper one over 6-8 eyelets and tied to a line on the wall (Trenkle 1941). In the event of an excess of shoots in the summer, thin and superfluous ones are removed. The main goal is to obtain not too many strong shoots and to fill the wall space well. A summer cut is similar to a tenon cut, that is, a short cut.

In a small garden you can try a new way of shaping shrubs, developed in Austria. This method was called "high cultivation". It is not the same as "tall plant", whose trunk has 1,5 m in height. In the Austrian method, knitting or strips (line) shoots or branches growing in a horizontal or hanging position are attached (method according to Lenz-Moser).

The grapevine was once a gift from the Romans. Over the centuries, viticulture has become very widespread in Central Europe, often as a monoculture. There are also downsides to this one-sided cultivation, which can be eliminated in a small garden. It is worth planting vines and following the biodynamic methods of growing it.

When the shoots reach length:

When the berries are in diameter 2 mm preparation of silica

End of August - mid-September, double silica preparation in the afternoon

After the leaves have fallen, fertilize with decomposed compost, in a dose from 0,5 do 2 buckets under the bush