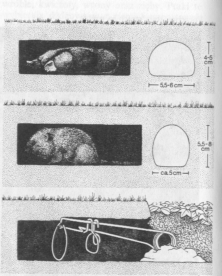 The cross-section of the pavement shows if a mole has dug it (at the top), or bank vole (inside); the best tool for fighting voles is a wire trap (downstairs)

Damage caused by voles, and especially the grubs, are among the most unpleasant for any gardener. The presence of these pests is recognized in the spring by the poor development of fruit trees or shrubs, which can also - when pulled by a branch - tip over. After removing such a tree from the soil, no roots are found. Voles damage not only tree roots, but also vegetables, e.g.. grown endives and chicory, and often also carrots and parsley. Plants wilt rapidly and do not resist removing them from the soil, for they no longer have roots.
Voles are found in all European countries. They are very skittish animals, that only leave their burrows at night, for care purposes, not for this, to find food. Therefore, it is difficult to determine the feeding sites of voles; they are usually indicated by damaged plants.
One pair of voles produces 3-4 litters in the summer, i.e. approx 30 young, of which more or less 10 arts are being destroyed by their natural enemies. Except during the breeding periods, these animals live singly, and the older they are, the less often they leave the burrows. Nomics live in burrows at a depth of up to 2 meters, connected by 10-15 m long corridors. Shallow below the surface is a whole system of 50- long corridors. 80 m. It has approx 10 holes, which, after use, the voles close again. The corridors are oval, 5-8 cm high and approx 5 cm (drawing); the mole's corridors are flatter and slightly smaller. Little, flat mounds partially filled with plants belong to voles. On the other hand, a mole in the mounds, which are bigger, there are insect debris. The exit hole from the vole corridor is on the side of the mound. Another hallmark of voles' corridors is the absence of roots, which are their food. The vole likes plants with a strong root system the most, like a potato, topinambur, vine, hop, fruit trees, root vegetables, and also onions. The food needs of voles are very high.

You can search for corridors with a thin stick or lightly tapping the ground in place, where the presence of a pest is suspected. In the corridor found, you need to make a hole with a spoon or spatula. If the hole is closed again after 15-30 minutes, means, that the sidewalks are inhabited by voles. Then we open the pavement again and set a trap in it. Plastic tubular traps are on sale. After inserting the trap into the corridor, cover the hole tightly, e.g.. board or plant material. The opening and the trap should be checked the very next day. It is advisable to set several traps at the same time in the detected network of corridors. The way they are placed in the corridor is important. It is best if an experienced person does it. Another way to combat voles is to flood the corridors with water or smoke with poisonous exhaust fumes. Due to the large number of corridors and their depth, these methods are very laborious and not very effective. It is more effective to unfold poisoned baits. There is an effective poison on sale, under the name Quiritox, containing substances of plant and animal origin. In Poland, grain poisoned with zinc phosphide or Ceder preparations is available for sale, Kumader, Toxaphen.

However, we should also use voles repellent. Plants that effectively deter voles include checkerboard, that is, the imperial crown (Fritillaria imperialis), and the spurge (Euphorbia lathyris).

You can make space in the large gardens, in which it is possible to create favorable conditions for the nesting of voles. It could be a field of Jerusalem artichoke, whose tubers are the favorite food of these animals. They also eagerly nest near the compost heap, under the trees, under wet bags, planks or in dry turf. In such places it is easier to wipe them out or catch them with the help of appropriate traps.
The natural enemies of voles should not be forgotten, like cats, psy (especially the terrier), hedgehogs, weasels and some birds of prey. Voles require continuous and long-term control, especially in gardens with untreated meadows. In such gardens, systematic soil control is especially important. As soon as you spot the corridors, it is immediately necessary to start effective control of this dangerous pest.