A very good way to protect the ground slope against erosion is to create and maintain a dense vegetation cover. The most effective way to protect the ground surface is the use of grassy vegetation. The rafts form very dense and highly branched roots in depth 10-15 cm and thus they can hold the finest soil particles very effectively, even on significant slopes. Therefore, one of the most effective ways of strengthening the ground surface has long been to cover it with turf. The turf used for the turf can be from the same site, if it was removed and secured before the commencement of earthworks. It is even more beneficial, because the plant species composition is already adapted to the local conditions.

The turf can also be prepared on specially established plantations. This method makes it possible to prepare any amount of it for a specific time without the need for damaging turf storage. The turf from such crops can be removed by mechanized methods and delivered to the site in rolled up patches. It is best to turf in the early autumn period, when relatively low temperatures prevent the turf from drying out, and frequent rainfall during this period facilitates its adhesion to the ground.

Before placing the turf, the ground surface should be properly leveled. If the soil is poorly fertile, the appropriate amount of nutrients in a multi-component mineral fertilizer should be applied (in the amount of approx 2,5 kg in 100 m²) or spread a few centimeters layer of fertile soil, compost etc.. 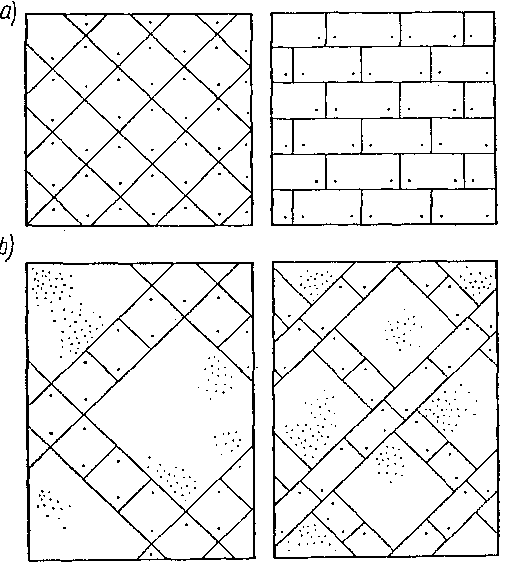 Schemes of turfing of the ground surface: a) total, b) partial (checked).

The ground surface may be fully or partially covered with turf. The turf is laid on the sloping surface in stripes from below at an angle of 45 °. The turf patch should be firmly pressed down, oo ensures water soaking and prevents it from sliding down. The danger of a landslide is greatest in rain and, of course, on larger slopes. A turf laid in such conditions can be secured against sliding by attaching its petals (nailing) to the ground with pegs. The places where the mounting pins are driven are marked in the drawing. Water surfaces in partial turf can be sown with seeds of appropriate plants or left to be populated with vegetation in a natural way..

Protection of the ground surface by turf, due to the considerable labor consumption and frequent difficulties in obtaining the appropriate amount of turf, is generally used on small areas.