When did granite flour start to be used in horticulture, gnejsu, porfiru, dolomite, marl and plaster, they became interested in their chemical composition. It concerned mainly marl and plaster. Marl is easy to weather and enriches the soil with calcium and magnesium, a plaster, thanks to the sulfur content, accelerates the process of weathering and the conversion of mineral compounds into forms available to plants. Other rocks, like granite, łupek and gnejs, they ventilate very slowly and in the conditions of central Europe they create soils of little use for gardening. To better understand the benefits of using basalt flour, it is good to be aware of the rock formation process on Earth. Fire and water played an important role in geological processes. Both of these factors acted differently and at different times, forming the basis of our world of minerals. Suffice it to recall the massive layers of limestone, formed in the Jurassic and Cretaceous from limestone skeletons of tiny animals, mainly open-hearted, living in enormous numbers in the seas of that time. Volcanic rocks were formed completely differently. Their formation was closely related to the second element - fire. During the formation of the Earth, matter was hot and plastic for a long time. She was also in constant motion. Over time, this mass hardened, and now only in the interior of the Earth remains liquid. This is evidenced by active volcanoes. The lava ejected from them immediately hardens, creating a seemingly inanimate substance. There is a peculiar phenomenon - on the hardened mineral, fertile soil is formed very quickly. The secret of this fertility lies not only in the substance itself and cannot be explained by chemical analysis. Lava has properties, which the chemist cannot explain. They are used by the farmer or the gardener, which establishes vineyards and farmland on the slopes of the volcano. Fresh lava is no longer found in central Europe, like on Mount Etna or Mount Vesuvius in Italy. However, you can admire the beautiful basalt mountains, exploited over large areas for the production of aggregate (Kaiserstuhl, Schwarzwald, Odenwald). Weathered basalt, changed to flour and added to manure or compost, enriches them with important micro-components and promotes the formation of a clay-humus complex. Basalt flour is an excellent addition to heavy soils and sandy soils poor in clay. The first dose is 1-2 t / ha and is sufficient for several years. With regular annual use, e.g.. in orchards or gardens, 200-300 kg / ha is enough. Before growing sensitive greenhouse vegetables (e.g.. lettuce in winter) it is applied in a dusty form to the soil, thanks to which plant growth is better and their sensitivity to fungal and viral diseases is reduced.

Individual basalts differ in their calcium content, magnesium and other elements. It is interesting to compare the chemical composition of basalt and dry flour, exceptionally fertile silt from the Nile (table). 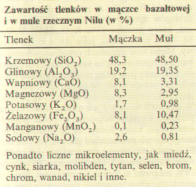