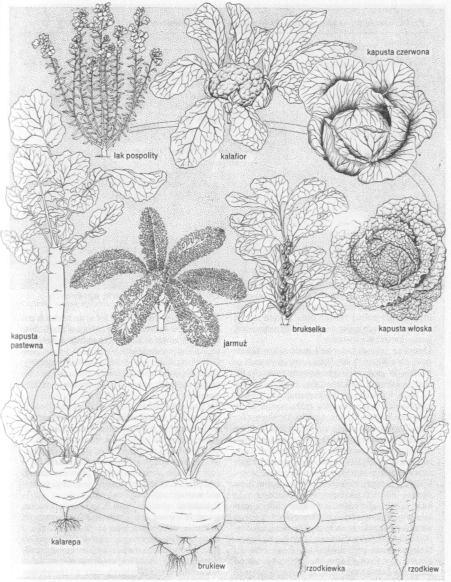 About the development of arable crops

Plants grow, are developing, they are one of the links in the circulation of matter in the environment, they produce offspring and die. Everyone knows about it, that plants are living creatures, but not everyone always treats them that way.
Plants, as living organisms, they have their own specific development process and history. The life span of a single organism ranges from several months to several years. The species, on the other hand, can develop over many centuries, and in the course of this development, the properties of individual representatives of this species change. This is how the groups of plants were created, which we grow today in the field and in the garden. We call these plants cultivated, thus emphasizing the important role of man in their formation. In the future, breeding will also produce other species and varieties, with new functional features. A cultivated plant is clearly different from its wild-growing ancestor. Even though they belong to the same family, they have few things in common, therefore they become distant relatives. Very often, typical traits of a given wild plant family are transferred to the cultivated plants. For example, wild species of cruciferous plants (weed radish, common steak, field bundles) they form a lot of seeds and are especially predisposed to produce a large number of flowers and fruits.

Cruciferous crops also tend to flower profusely and bear fruit. Various forms were bred in this group, stems may be an edible part, leaves, inflorescences or roots. Possibilities of growing very diverse forms - we are talking about the example of the cruciferous family. The thickened radish root is deep in the ground, while in the case of radishes some of it is located just above the surface of the earth. The edible part of kohlrabi is the thickened part of the stem, which is located just above the soil surface. The head of the head cabbage consists of numerous leaves growing from the shortened stem and forming a dense ball. In Brussels sprouts, on the other hand, strongly leafy shortened side shoots grow from the leaf axils, with closed apical bud, forming small heads. The cauliflower rose is shortened and thickened, fleshy flower shoots. Broccoli roses are made in the same way, but they differ from cauliflower in a looser form.
Thus, as a result of breeding, man changed the nature and characteristics of wild plants.