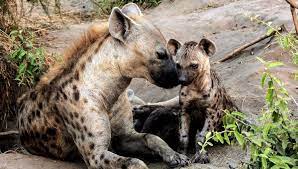 Hyenas living in Africa, Bliskim Wschodzi i Indiach they have the opinions of scavengers. There are several species of hyenas. They differ in color. They can have pennies, various shades of brown or gray. However, the most common species is the spotted hyena, brown hyena, striped hyena. Hyenas, depending on the species, live in smaller or larger herds. They are friendly towards each other. They mark their territory with the secretions of feces or urine. They greet each other by sniffing each other. Hyena, when he gets angry, they are biting fangs. Although hyenas have a reputation for scavengers, the spotted hyena is a very formidable opponent. She hunts with her friends for large animals: antelopes, zebras, and even rhinoceros. Hieny centkowane są bardzo agresywne. After attacking the animal, they tear its flesh into shreds and the animal experiences agony. Hieny wyrywają też sobie mięso wzajemnie, zwłaszcza większe kawałki. Even lions and tigers avoid spotted hyenas. Z wyglądu hieny są podobne do psów i wilków, but their heads are low to the ground. They don't drink water, because they only need it in meat and fruit, which they also like very much.