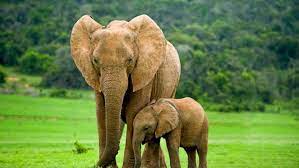 Elephants are amazing mammals. They appear in 2 genres: African, living in Africa and Indian, żyjące w Indiach. African elephants are larger, which weigh 10 tons. Słoń ma też potężne nogi kolumnowe i trumpet consisting of 15 thousand. muscles, which is a phenomenon among animals. The proboscis was created by connecting the nose with the upper lip. Służy do pobierania wody i pokarmu. One puff of the proboscis can draw a whole bucket of water. He also grabs various weights with his trunk. Z tego względu in India, elephants are hired to work. The elephant acquires the ability to use the trunk over the years. Little elephants have difficulty handling their trunk, even them it disturbs them while they play. The elephant also has huge fan-shaped ears, fanning and cooling down your body, and ward off insects. Elephants live in packs, family. Wspólnie wychowują potomstwo. The oldest elephants are the guides of the herd. Po jej śmierci kolejna samica obejmuje przewodnictwo stada. Elephants live a long time, just like a human. They can give birth to small elephants up to the age of 60. Elephants feed on grass, leaves, twigs, they move vast areas in search of water and food. They have an excellent memory. They remember the source of the water, even several dozen years have passed since then, in which they drank water from it. They can travel up to 1000 km, because they remember the place of the spring from their childhood. They do it then, when there is a severe drought.