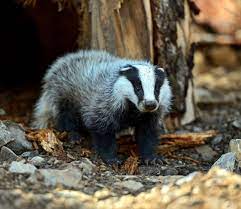 Badgers, due to their appearance, are one of the most famous mammals in the world. They lead a nocturnal lifestyle. They spend the day in their burrows. Zamieszkują Europę i Azję. Some of the badgers copy burrows in environments, where people live. For this purpose, they choose parks, trash cans and use food, which people feed them. Borsuki żyjące w lasach z pokolenia na pokolenie they expand their corridors and widen their burrows. Badgers are omnivores. They eat plants, mushrooms, and also earthworms, mice, winding, little bunnies, or hedgehogs, which are curled up in a ball. Badgers do well with predators. They have strong, strong jaws set on an elongated head. Borsuki potrafią mocno ugryźć przeciwnika. Strong claws also help them defend themselves, which developed as a result of digging underground burrows.